From the Azurilland Wiki, a database for the Pokémon series that anyone can contribute to
Jump to: navigation, search
← Ivysaur | Venusaur | Charmander →

Venusaur (pronunciation: VEE-nuh-sawr) is a dual-type Grass/Poison Starter Pokémon of the Kanto region, evolved from Ivysaur and Bulbasaur. Venusaur is the Version Mascot for Pokémon Green and Pokémon LeafGreen.

Venusaur is a large dinosaur like Pokémon that is somewhat similar in appearance to its pre-evolved forms, Ivysaur and Bulbasaur. Its skin still retains a light turquoise color, but it no longer has the spots, and it appears more rough and scaly with bumps here and there. The former bulb on its back has now fully bloomed into a gigantic flower and its ears have lightened up as well.

Venusaur is the final stage of Bulbasaur; it evolves from Ivysaur starting at level 32. 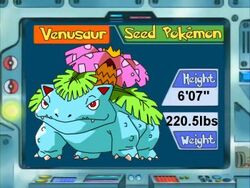 Venusaur in the (anime)

Venusaur first appeared in the anime as a gigantic robot, constructed for an amusement park, in the episode Island of the Giant Pokémon!.

Another Venusaur appeared in the episode Bulbasaur's Mysterious Garden. It aided in the evolution ceremony for a large number of Bulbasaur.

May owns a Venusaur, which she used in a competition during the episode Pruning a Passel of Pals!. It is unknown when her Venusaur evolved as it was still a Bulbasaur when she left Ash's group.

Palace Maven Spenser owned a Venusaur, first seen in the episode Cutting the Ties that Bind, where it was used against a group of Beedrill. In the episode Ka Boom with a View, Spenser again used his Venusaur, this time in battle against Ash.

The leader of the Orange League, Drake, used a Venusaur in a battle against Ash in the episode Enter the Dragonite.

Venusaur first appeared in the original Generation I games as the final evolved form of the starter Pokémon Bulbasaur. As with other starter Pokémon and their evolved forms, Venusaur is not obtainable in the wild and must be obtained through trade or by evolving Ivysaur.