From the Azurilland Wiki, a database for the Pokémon series that anyone can contribute to
Jump to: navigation, search
← Serperior | Tepig | Pignite →

Tepig made it's first appearance in BW001. 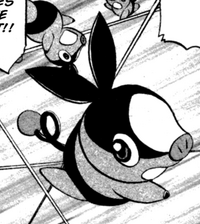 In the Pokémon Adventures manga, Black owns a Tepig.