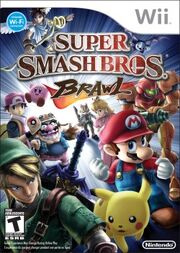 Pikachu and Jigglypuff reappear as playable characters in this installation, as well as newcomers, Pokémon Trainer and Lucario. Pikachu and Pokémon Trainer are playable from the start, while Jigglypuff and Lucario require to be unlocked. The Poké Ball reappears as an item, and like its previous appearances in the Smash Bros. series, a Pokémon will come out upon being thrown to the ground. (ex. Munchlax, Meowth, Torchic, Deoxys, Chikorita, and many others).

There is a way to see Mesprit, but it is very rare. You must go to Spear Pillar and have Palkia on the stage, and while Palkia is doing something, it will quickly appear and is very hard to see. As this is probably be true, Uxie may appear with Cresselia and Azelf may appear with Dialga. It is also known that Darkrai can be seen with Cresselia in this process.

Pokemon Trainer has the Pokémon:

Brawl's Adventure mode is a new and original storyline featuring many characters from Nintendo. Pikachu, Pokémon Trainer, and Lucario play important roles in the story but Jigglypuff is an unlockable after the story is finished.

Note: the text below is from Smashwiki.

Pikachu is first seen when Samus, in her Zero Suit enters a lab on the Isle of the Ancients. She finds that Pikachu is having its electric energy drained by a device, and uses her Plasma Whip to break the glass encasing Pikachu. With their common goal of revenge on the Subspace Army, they infiltrate the Research Facility to find Samus' Power Suit.

After going through the first area of the Research Facility, Zero Suit Samus and Pikachu discover a monitor room, and learn the location of Samus' Power Suit.

They then traverse another section of the Research Facility. They cross a bridge to reach the Power Suit. When Samus approaches the Suit, she and Pikachu are ambushed by two Shadow Bug clones of her Power Suit. After defeating them, Samus regains her Power Suit, and after defeating a small R.O.B. Squad, travel through the last area of the Facility. Later, the duo almost exit the Research Facility, but are then confronted by Ridley, who brutally damages Samus by dragging her across the wall. Pikachu uses Thunder on Ridley to stop him. Samus falls back down onto the platform, her Power Suit damaged, but working, while Ridley, enraged by Pikachu's electric shock, roars at them. The two then fight and defeat Ridley. After defeating Ridley, Pikachu and Samus leave the facility and notice a pair of R.O.B.s carrying a Subspace Bomb. They prepare to enter the Subspace Bomb Factory.

They infiltrate the Ancient Minister's base, and eventually enter a large room, with him, an army of R.O.B.s, and a great number of Subspace Bombs on racks behind them. They prepare to fight him but pause, noticing that Ancient Minister is looking down as if he's sad.

Meta Knight is making his way up a snowy mountain with the Ice Climbers in pursuit. Meta Knight is trying to catch the Halberd which has flown overhead. At the top, he encounters Lucario in a meditative stance on the peak of the mountain. Lucario challenges Meta Knight and the two fight, as the Ice Climbers nervously watch on. After the battle, the victor revives the other from his trophy state. The pair deem each other worthy and shake hands, making an alliance. Suddenly the Halberd slams the Great Fox into the mountain, and Lucario and Meta Knight board it whilst Ice climbers are knocked off the mountain into the valley below . After managing to get onto the Halberd, the two pass by Snake, who is hidden in his box. Lucario, being the only one who notices something suspicious about the box, uses its aura to peer into it. Seeing Snake huddled inside, Lucario removes it, and Snake realizes that his cover is blown. Meta Knight draws his sword, but just as he and Snake prepare to fight, Lucario steps in, having sensed a mass of Primids approaching, and the three team up to fight through. Not long after, the trio meets up with Zelda and Peach as their trophies are cloned by the Shadow Bugs. Once the clones are taken care of, Snake, Lucario and Meta Knight discover that the Halberd bridge is being piloted by a group of Mr. Game & Watches. They knock all of the Mr. Game & Watches out of the window, and they all land near Peach, Sheik, and Fox who have gathered on the deck of the ship. The Mr. Game & Watches then revert into Shadow Bugs, which fuse into Duon. Lucario and Snake leap from the bridge to the aid of the trio already there, and they are joined by Falco, skydiving from his Arwing. They battle and defeat the monster, who collapses into wrecked metal, Shadow Bugs and Mr. Game & Watch's trophy. Peach revives him so he can join your party. Meta Knight, with the Halberd once again in his control, steers his vessel into brighter skies.

During the Subspace Emissary, Pokémon Trainer will often Space Jump around the level to catch up with his Pokémon. This is seen as an orange-yellow streak across the screen.

After fleeing from Wario, Lucas bumps into the Pokémon Trainer, who advises him to stand back, and proceeds to take on a group of Primids with his Squirtle, which Lucas accompanies to defeat the Primids. After saving Lucas, he goes on his way, but Lucas follows him. As the story progresses, they develop a rather strong friendship. Pokémon Trainer is searching for two Pokémon, Charizard and Ivysaur, that are identified when he shows Lucas their cards. So, he and Lucas set out to find them. Until then, Squirtle is the only choice the player can use and using Down Special will not result in anything except the Pokémon Trainer in the background "flipping" a Poké Ball in his hand twice. Outside of an old temple, they survive a brief encounter with Wario. After venturing deep into the ruins, finding Ivysaur, and battling and capturing Charizard, players will then fight a giant monster named Galleom. When the boss is defeated, it will grab both Lucas and Pokémon Trainer after the fight (fainting the latter), and jump up into the air, revealing an armed Subspace Bomb in its head. Lucas then uses PK Thunder to detach the arm, and they free-fall towards the ground. Before hitting the ground and narrowly escaping the Subspace explosion, Meta Knight grabs them both before collision, in-flight and takes them to Marth and Ike. Later, Pokémon Trainer and Marth watch as Ice Climbers fall from the mountain. As the Shadow Bugs swarm over the cliffs, he joins Marth, Ike and Lucas in repelling the Primids. As he retreats, tossing a Poké Ball from hand to hand, Mario, Pit, Link, Kirby and Yoshi arrive at the Canyon entrance.