From the Azurilland Wiki, a database for the Pokémon series that anyone can contribute to
Jump to: navigation, search
← Herdier | Stoutland | Purrloin →

Stoutland is a dog-like Pokémon. It is mostly blue in color with some brown showing. It has a very long mustache going down to the floor and a blue cover over its body and tail. It has small paws and large ears on the top of its head. It also has forehead hair in the shape of a "W". It resembles a Yorkshire Terrier. 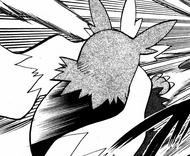 Stoutland in the Pokémon Adventures Manga.

Stoutland evolved from Herdier, a Normal, starting from level 32. Stoutland is the final form of Lillipup.