"I had a vision of your arrival! I have had psychic powers since I was a little child. I first learned to bend spoons with my mind. I dislike fighting, but if you wish, I will show you my powers!"
— Sabrina, Pokémon Red and Blue and Yellow.

Sabrina (ナツメ, Natsume) is the Saffron City Gym Leader and is an adept user of Psychic-type Pokémon. She gives the Marsh Badge to trainers able to defeat her. 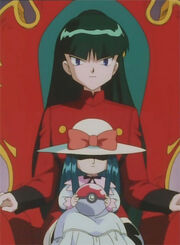 Sabrina split into two different pesonalities: the younger self and the older self.

Sabrina made her first appearance in the anime episode IL022: Abra and the Psychic Showdown. During this episode, Sabrina was represented by two personalities; one that was cold and emotionless and another that was playful. The playful personality represented the youth of Sabrina. Ash challenged Sabrina to a Gym Battle, but Sabrina summoned Abra and made it use Teleport. It eventually evolved into a Kadabra, such a powerful opponent that it was impossible for Ash to defeat her. Upon his defeat, he and his friends were shrunk into doll-sized people by Sabrina. Just before the three trainers could be squashed to death, they were rescued by an unknown man, who informed them that the only way to defeat Sabrina's Psychic Pokémon was by using Ghost-type Pokémon.

After making a trip to Lavender Town and befriending a Haunter, Ash again challenged Sabrina in the episode "Haunter Versus Kadabra". The Haunter he needed to help him was often disappearing at critical moments, causing a loss again to Sabrina and Brock and Misty being turned into dolls. There they met Sabrina's mother, who had also been transformed into a doll.

The mysterious man that had saved Ash was revealed to be the father of Sabrina, and after a conversation with him Ash once again challenged Sabrina. This time around Haunter decided to come to the battle, though instead of fighting, he began to play with Sabrina, causing her to laugh. Sabrina's Kadabra was unable to battle due to their psychic connection, leaving Ash the victor. Sabrina was reunited with her family and the Haunter stayed with her. With this development, Ash received his Marsh Badge.

In Pokémon Adventures, Sabrina served as a gym leader in Saffron City and also as a member of the Team Rocket Triad along with Koga and Lt. Surge.

Sabrina, in the games, was a far less complex character than her Anime personification. She was first seen in the original Red and Blue games, as the Saffron City Gym Leader. When defeated, the player received the Marsh Badge along with a TM. In the Generation I games the player received TM46 (Psywave) and in the Generation III games, TM04 (Calm Mind). After Sabrina's defeat in HeartGold and SoulSilver, she was found at Olivine Port on Fridays, ready to give out her PokéGear number. She was at Olivine Port on Mondays, and could be called for a rematch on Sundays between 10 a.m. and 8 p.m.

In the series Pokémon Adventures Sabrina was an executive for Team Rocket along with Lt. Surge and Koga. She fought Red to prevent him from interfering, but as usual, it resulted in failure.