Oreburgh City is known as the "City of Energy". Buildings here include Pokemon Center, Pokemart, the Gym Leader, Roark, Oreburgh Mining Museum, and Oreburgh Mine. At the north, it is Route 207, but is inaccessible without a bike. To the west, it is Oreburgh Gate. Oreburgh Mine is at the south. Oreburgh city is west of Jubilife City

It is recommended that you use a Grass-type or Water-type Pokémon to exploit Roark's Pokémon weakness. If you chose Chimchar at the beginning, it will be difficult to battle, so you have to catch a Pokémon that can exploit his Pokémon, such as Machop.

After you have battled Roark, you will receive a Coal Badge. This badge allows you to use HM06 Rock Smash outside battles. He also gives you TM76 Stealth Rock.

When you first visit Oreburgh City, a Youngster will talk to you and bring you to a Gym. Your rival is standing at the entrance, apparently he had defeated the Gym Leader. He said that the Gym Leader is not at the gym, he is currently at Oreburgh Mine mining rocks. Head to Oreburgh Mine to find him.

Trading for a Machop

A girl in a house wanted a Machop and willing to trade her Abra for it.

This is the place where you can extract Pokémon from fossils. Talk to the impatient man at the counter to extract the fossils. He can extract fossils later when you complete more of your adventure. 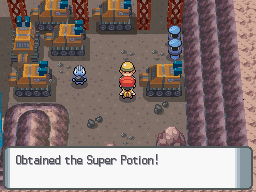 If you have a Zubat(or a Geodude in Platinum) in your party, visit the second house next to Oreburgh Gate and show it to the plump man at the second floor. He will give you a Heal Ball.

You can access Eterna City directly at Route 207. But it is inaccessible without a bike. So you have to go back to Jubilife City and head north to make a detour to Eterna City. You will get bumped by your friend when you are heading to the Oreburgh Mine, he will explain for you and then run off to Eterna City. 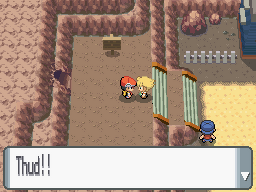