From the Azurilland Wiki, a database for the Pokémon series that anyone can contribute to
Jump to: navigation, search
← Vulpix | Ninetales | Jigglypuff →

Ninetales (Japanese: キュウコン Kyuukon) is a Fire-type Pokémon who evolves from Vulpix. 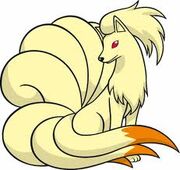 Ninetales is a fox-like Pokémon that have nine tails, hence its name. They are mainly covered in a light, yellowish-cream-colored fur, while the tips of their nine tails are orange. On top of their head is a large tuft of hair, similar to its pre-evolved form though much more unruly.

Additionally, there are no gender differences between male and female Ninetales. The shiny version of Ninetales have silver-gray fur instead of its usual light cream fur, and its tails are tipped in blue.

All Ninetales have the ability Flash Fire, which powers up its Fire-type moves if it is hit by a fire-type attack. It also keeps it from getting damaged by fire attacks.

Ninetales is the evolved form of Vulpix, who evolves into Ninetales by the use of a Fire Stone.

Ninetales appears to be based on a fox.

Its name, Ninetales means nine tails for that it does have nine tails.