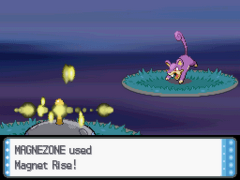 Magnet Rise is an example of a move

A Move (Attack) is a technique that Pokémon use during Battle. Moves are mainly used to inflict damage on the opponent. Moves usually come from a natural ability that the specific Pokémon has. Some moves can be used both inside and outside of battle. When outside of battle, moves are usually used for transportation or for removing a certain obstacle that occurs in the game. There are three types of moves; Physical, Special, and Status. Each type holds a different kind of effect when used.

Furthermore, all Pokémon moves have an elemental type associated with them. Depending on the type of Pokémon one faces, this can make a move "super-effective", "not very effective" or have "no effect" at all.

Physical is a category of move, along with Status and Special, which appears in the games Pokémon Diamond, Pearl, Platinum. Most moves in this category have to deal with Physical contact between the user and the target, like a punch or kick.

Special is a category of attack, along with Status and Physical, which appears in the games Pokémon Diamond, Pearl, Platinum. As the name suggests, most moves in this category have to deal with the user projecting their attack through energy or other forces of nature.

Status is a category of attack, along with Physical and Special, which appears in the games Pokémon Diamond, Pearl, Platinum. As the name suggests, most move in this category cause status problems. Within this category, it is sometimes separated into the 'Negative Status' Moves, which cause status problems, and the 'Positive Status' Moves, which power up the user or erase negative status conditions.