From the Azurilland Wiki, a database for the Pokémon series that anyone can contribute to
Jump to: navigation, search
← Dragonite | Mewtwo | Mew →

Mewtwo (Japanese: ミュウツー Myuutsuu) is a Psychic-type Legendary Pokémon introduced in Generation I. Giovanni hired scientists from Cinnabar Island to create it, which they did using Mew's DNA. It is the final boss in Pokemon Ranger: Guardian Signs. Right after that, it gains levels of power, forcing the player to fight it twice. It later rescues Rand from a different dimension. It is the highest level Pokémon to be caught in Pokémon Fire Red and Pokémon Leaf Green, appearing at Level 70 in Cerulean Cave. It ranks 3rd in Pokémon statistics, behind Black/White Kyurem and Arceus. It has 680 base points, behind White/Black Kyurem's 700 and Arceus' 720.

Mewtwo is based loosely off of Mew with feline features. Its body is purple and it has three fingers on each hand. Mewtwo has a faint purple Aura emerging from it at full power.

Mewtwo is highly adept at using its Psychic powers, displaying telekinesis and telepathy as well. It uses it's telepathy to communicate with humans and translate the Pokémon language. It is able to Fly and erase people's memories as seen in Mewtwo Strikes Back. 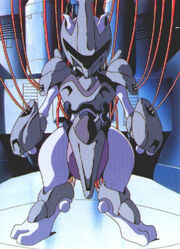 Mewtwo in its armor when Giovanni controlled it

Mewtwo's anime debut was in Battle of the Badge! where Giovanni used it against Gary, who referred to it as an "evil" pokemon. Mewtwo again appeared in It's Mr. Mime Time briefly. Mewtwo also appeared in Showdown at the Poké-Corral! where it escaped from Giovanni's gym, as seen in the movie. Mewtwo has been the focus of a few movies, being the main Pokémon in Mewtwo Strikes Back and in Mastermind of Mirage Pokémon, under the control of Dr. Yung. Mewtwo was also the star of the movie; Mewtwo Returns.

It was created by Blaine in a laboratory and went on a rampage, almost destroying Cerulean City. When Red heard about "The Monster of Cerulean City", he decided to catch it. After a single encounter with the tornado that was Mewtwo, he met Blaine. Blaine told Red of his condition, how if Mewtwo continued to rampage, both Blaine and it would die. Blaine then continued to show Red his disfigured hand, a mark that he shared with Mewtwo, and concluded his talk with Red, declaring he intended to kill Mewtwo, in order to put it out of its misery, and also to save his own life. Red later encountered Blaine attempting to finish Mewtwo. Red, after stopping Blaine's attempted suicidal killing of Mewtwo, caught it using his whole team, and launching Pika with the Master Ball in its mouth, catching Mewtwo for Blaine. Blaine decided to train and raise Mewtwo as his own. Later, Mewtwo appeared alongside Blaine, battling a child helping them train. Blaine assisted Yellow from then on out, being paired with Yellow by Sabrina's Alakazam. In this setting, we learn that Mewtwo needs to rest in its Poké Ball, and if it was released for too long (over 5 minutes), it would die. It then appeared again in the FireRed and LeafGreen chapter, being loaned to Red by Blaine. It aided the Pokédex holders in stopping 9 Forretress from blowing up Neo Team Rocket's airship with Explosion, and with fighting Deoxys. Since then, it is unknown if Blaine and it died, or if it is back on Cinnabar Island, training with Blaine.

Mewtwo's name comes from the word 'Mew', which is like a cat meowing, and 'two' because it's a clone of Mew. It is based on a DNA scientific cat.