From the Azurilland Wiki, a database for the Pokémon series that anyone can contribute to
Jump to: navigation, search
← Mewtwo | Mew | Chikorita →

Mew (Japanese: ミュウ Myuu) is a Psychic-type Mythical and Legendary Pokémon, and is the last Pokémon in the Kanto Pokédex. Unlike any other Pokémon, it has the ability to learn every TM and HM except Draco Meteor.

Mew does not evolve into or from any other Pokémon; however, its DNA was cloned to create Mewtwo. It was the last Pokémon in the Pokédex until Generation II was released.

Mew's appearance is that of a pink cat-like Pokémon with large feet, blue eyes, small pointed ears and a long, skinny tail. It is covered with a layer of fine pink hair, only visible with the aid of a microscope. It has short arms with three fingers on each paw.

Mew has the Ability Synchronize. This ability allows it to pass on any status problem, except Sleep and Frozen, to its opponent. This ability also raises the encounter rate of Pokémon with its same nature.

Additionally, it is said that Mew's DNA possesses the genetic composition of all existing Pokémon species, thus allowing it to use all known Pokémon techniques. Also, as shown in Lucario and the Mystery of Mew, it can change into any Pokémon using Transform. It changed into Meowth, Ho-Oh, Pidgeot, Pikachu, Aipom, Treecko, Taillow, Mime Jr., and Pichu.

Mew has also shown its ability to Levitate, create force fields, and change its form into any existing species of Pokémon. It is a very versatile and powerful Pokémon. 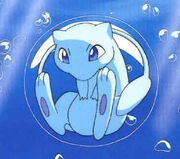 Mew as it appears in the movie.

Mew has been featured in several Pokémon movies, having a large role in most of them. Mew first appeared in the movie Mewtwo Strikes Back or Pokémon the First Movie, and fought with Mewtwo.

Mew's second movie appearance was in Lucario and the Mystery of Mew, where a different Mew from the first movie takes Meowth and Ash's Pikachu to the Tree of Beginning. Mew has also made appearances in other movies. Mew has been shown several times though in the TV series anime. Mew is in the opening theme of the Pokémon anime series, and it was featured in the TV Movie special Mewtwo Returns, during a flashback sequence of Mewtwo's. In the episode A Lean, Mean, Team Rocket Machine, it appears in one of Meowth's boss fantasies, along with Celebi, Phione, Manaphy, and Jirachi. It appears as a mirage Pokémon in the special The Mastermind of Mirage Pokémon.

The first legendary Pokémon that Red saw was Mew; he tried to capture it, but due to his lack of experience he was unable to catch it. In the Emerald arc, Emerald used soil from Mew's birthplace to calm down all the rental Pokémon as Mew had the DNA of all Pokémon.

Mew has been a featured Pokémon in every one of the Super Smash Brothers games.

Mew's name likely has to do with the onomatopoeia for a kitten's cry, referring to its cat-like appearance.