Kris is the female playable character in Pokémon Crystal, her first and only game. She was the first ever playable female character in the Pokémon games. In the Generation IV remakes of Gold and Silver, HeartGold and SoulSilver, she was replaced by Lyra.

Kris is a young girl with brown hair and pale skin. She wears a red tanktop, as well as black and yellow shorts. She also wears a yellow hat and red sneakers. It's difficult to infer Kris's age due to limitations of the Gameboy, but from her artwork it can be inferred due to her body's consistency and development that she is a young child, probably around 8 or 9.

Kris' counterpart in the anime is Marina. 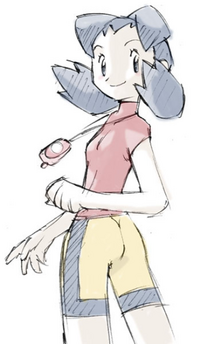 Her name may be a play on the word "crystal" (Crystal).