IL046: Attack of the Prehistoric Pokémon

The group continue on their way and notice people digging for fossils in Grandpa Canyon. Gary shows up for this too. Ash wants to dig for fossils so that he can find a better fossil than Gary.

Gary finds a fossil and an archeologist examines it. Gary think's it's the brain of an extinct Pokémon but the professor says it's a Pokémon coprolite fossil (fossilized Pokémon manure).

Meanwhile, Team Rocket plants bombs in the canyon so they can find fossils quicker. Ash notices this just as Meowth lights the fuse. Ash and Squirtle chase it trying to put out the fuse. It gets to the end and Pikachu shoots an electric beam at it in panic. The blast goes off and Ash, Team Rocket, and Pikachu find themselves underground. Squirtle is the only one who escapes quickly enough. Misty and Brock hear the explosion and they run over to it and they find Squirtle. Misty, Brock, and Squirtle quickly start diging to find Ash and Team Rocket.

Meanwhile, Ash and Team Rocket try to find a way out. They meet some ancient Pokémon who they thought to be extinct. Jessie and James say that the blast must have woken up Pokémon that have been sleeping for 1,000 years.The ancient Pokémon are mad at Ash and Team Rocket for waking them up, so they attack but suddenly run off. They are happy the Pokémon left but then they realize why they left: an Aerodactyl apears, grabs Ash, and swoops up into the air .

Misty sees Jigglypuff and asks it to sing so Aerodactyl will fall asleep and drop Ash.Jigglypuff happily starts singing. Aerodactyl falls asleep and drops Ash. Ash is caught by Charizard who managed to stay awake. Officer Jenny tells everyone that it was just a dream caused by Jigglypuff’s song and sends the people on their way. Ash gets an egg from the site, which Brock steals from him to take care of. 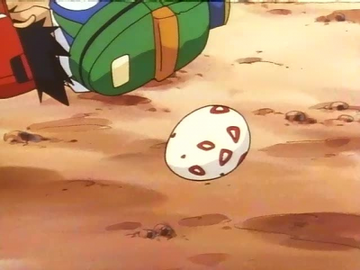