Ash, Misty, and Brock continue their travels and come to Scissor Street which is known as Breeder's Lane. Brock explains that the street is well known for its many salons and beauty parlors for Pokémon. 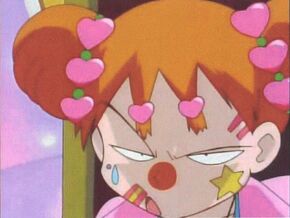 Misty and Ash look at a poster outside one of the salons and it has a Koffing and an Ekans wearing many accessories. Debating whether or not to try to enter the Salon Roquet, there are customers in the salon, they are interrupted by Brock, who has found the place he was looking for. Ash and Misty follow him to a store that's nearly empty and Brock suddenly becomes very nervous. Ash and Misty enter the store first and they are greeted by a woman's voice. Hearing the voice, Brock gets over his nervousness, and follows Ash and Misty into the store.

They meet a Pokémon Breeder named Suzy, who is massaging a Chansey. Misty notices a Vulpix sleeping on a chair. She walks over to it, picks it up, and gives a big hug, saying how cute it is. Vulpix is mad that Misty woke it up from its nap and burns her face with a Flamethrower attack.

Brock, who has been very quiet until now, blurts out that he would like to become Suzy's pupil. Everyone is shocked, espically Suzy. Brock explains that Suzy is a famous breeder and is his idol.

Later, Suzy serves Ash and his friends some tea and Brock gives Pikachu some food to eat. Suzy admires Pikachu's shiny coat and asks Brock if he made Pikachu's food. Brock says he did and Misty says its his own recipe. Vulpix walks over to Pikachu and sniffs at the bowl of Pokémon food Pikachu is eating. Pikachu offers some of it to Vulpix and it accepts it. This surprises Suzy, who explains that Vulpix usually only eats food that Suzy made herself.

Misty mentions the flashly dressed Pokémon they saw at Salon Roquet. Suzy sighs and explains that ever since Salon Roquet opened up, people have stopped coming to Suzy's salon and have been focusing on making their Pokémon look good, not making their Pokémon happy. Ash says that looking flashy is stupid and Misty says that even Pokémon like to dress up every once in a while. They start fighting over if it is more important to make your Pokémon happy or to make them look good. Ash jokeingly suggests that if Misty thinks fashion is so important, she should take Psyduck to Salon Roquet. Misty thinks its a great idea and takes Psyduck over to Salon Roquet at once, a move that Ash just laugh at and thinks will not work out.

After Misty leaves, Suzy doubts her ways, but Ash and Brock quickly tell her that she is doing the right thing. Brock suggests a way for Suzy to compete with Salon Roquet: combine style and substance. Soon, Suzy gives a lecture outside her store on Pokémon Breeding. She explains that after a Pokémon is hurt in battle, its trainer should give it a therapeutic massage, which she demonstrates on Pikachu. As Brock planned, the lecture draws away the crowd from the Salon Roquet. As Suzy, Ash, and Brock explain how important it is to take care of your Pokémon, many of the people begin to doubt if they made a good choice by spending their money at Salon Roquet.

Meanwhile, at Salon Roquet, Jessie tells Meowth to send in the next customer. Meowth says he and James are too busy counting the money they have made. He then notices that Misty is the only customer left. Team Rocket drags her in for a makeover while she protests that Psyduck was the one that needed a makeover, but she loves the bright and flashy costumes they put her in and she asks Jessie and James to continue.

Meowth mentions how they may be able to kidnap Pikachu now and Misty realizes who the Salon Roquet stylists are. Misty yells that she will never tell Team Rocket anything, but James threatens to paint her face like frankinstein if she doesn't. Misty notices that Psyduck has gone missing and she yells for Psyduck. Psyduck, it turns out, has gone back to Suzy's Salon, where it goes into a panic. Pikachu manages to translate that Misty is in trouble. Ash, Suzy, Brock, Pikachu, and Psyduck hurry to Salon Roquet where they find Team Rocket painting Misty to make her look like a clown.

They are shocked when they see what Team Rocket has done to Misty. Team Rocket says they are doing important beauty research on her. Meowth, accidentally lets slips that they are trying to get information about Pikachu out of her.

Team Rocket offers a trade: Misty for Pikachu. Ash refuses and challenges them to a battle. Team Rocket pushes a button on a microphone and revals their newest invention, The Salon Roquet Battling Stage. To start the battle, Jessie and James send out Ekans and Koffing, still in their crazy costumes. Ash sends out Pikachu and Brock sends out Geodude. Brock tells Geodude to use Seismic Toss and Geodude picks up Ekans, throws him into the air, and throws him back down into the ground. Ekans turns the momentum into a spinning attack and rams into Pikachu. Ash tells Pikachu to use ThunderShock, but Ekans and Koffing's outfits block the attack. James orders Koffing to give Pikachu and Geodude a sludge makeover, which blinds Pikachu and Geodude. As Ekans and Koffing are about to end the battle, they trip over their costumes and get all tangled up. Meowth tries to help them, but he gets tangled up too. Suzy says if you focus on only outer beauty, strength will be lost. She tells Vulpix to use Fire Spin, which sends Team Rocket blasting off.

The crowd, seeing that inner beauty is stronger than outer beauty, start ripping off their Pokémon's flashy costumes and wiping off the make up.

Back at Suzy's salon, Suzy thanks Ash and his friends for helping her regain her confidence. She plans to leave her salon for a while and go on a journey to discover what it really means to be a Pokémon breeder. She says Brock is the first person besides Suzy that Vulpix has trusted and asks Brock to take care of Vulpix for a while. Brock accepts and recieves Vulpix. Meanwhile, Misty still has her clownish makeup on and Ash has to hold back his laughter just from looking at her. It seems he did get the last laugh in the end.

Soon, Ash and his friends are on their journey again and they wave good-bye to Suzy. Team Rocket runs past them, being chased by an angry mob of their former customers.

Watch this and other episodes: Pokémon Episode 28: Pokémon Fashion Flash