Charmander - The Stray Pokémon (はぐれポケモン・ヒトカゲ Stray Pokémon - Hitokage) is the eleventh episode of the Pokémon anime series, except in the United States, after Battle Aboard the St. Anne was broadcast as the first episode. The episode was first broadcast in Japan on June 10, 1997 and in the United States on September 22, 1998. The episode follows Ash Ketchum, Misty, Brock and Pikachu keep trying to find a way to Vermilion City and encounter a Charmander which belongs to a trainer named Damian who abandoned it. After seeing the truth Charmander left Damian to travel with Ash.

Ash, Misty, and Brock are still lost, making Misty very frustrated. They stop walking to look at the map Brock unfolded. Ash figures out that the path they are walking on leads to Route 24, the route to Vermilion City. Brock folds up the map and puts back into his backpack. As they start to leave, a big shadow crosses their path. Ash can't see that well, because the sun is shineing right in his eyes, and he tells Pikachu to get ready to attack. Pikachu runs and hides behind a big rock. The sun then stops shining so bright and Ash sees that the Pokémon on the rock is a Charmander.

Ash throws the Poké Ball again and this time Charmander goes in but it quickly comes back out. Pikachu climbs up on the rock and talks to Charmander. Pikachu then uses a charades display to tell Ash what Charmander said. Ash eventually figures out that Charmander is waiting on the rock for its trainer to come and pick it up. Brock says its best to leave it there. Ash, Misty, Brock, and Pikachu leave Charmander.

Further down the road, Ash and his friends find out that there is a Pokemon Center on the map. Ash says that Route 24 can't be that far away now. The moment he finishes saying that, it starts pouring rain and they run to the Pokémon Center for shelter.

A small scene shows Charmander still on the rock trying to protect its flame on its tail with a leaf. (If the flame goes out Charmander will die) Back at the Pokémon Center, Misty is serving some soup and Brock is still worried about Charmander. Ash points out to him that its trainer would have come to pick it up by now. Brock agrees.

Nearby, they hear some people laughing and they all look over to see what's going on. They see a trainer named Damian and a group of trainers who are in awe over his collection of Pokémon. One of them asks Damian if he has a Charmander. Damian said he did but it was so weak that left it sitting on a rock and told it to wait for him to come back, which he plans to never do. 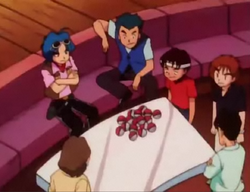 Ash, Misty, and Brock realize that the Charmander they saw earlier must be the one Damian had abandoned and it is still waiting for him on the rock out in the rain. This makes Brock furious and he marches over to Damian. Damian and the trainers are laughing at how Charmander was waiting for Damian to come back. Brock tells Damian that he had better go get Charmander because out in the rain the flame on Charmander's tail might go out and if it does, Charmander will die.

Damian laughs and says that its not his problem anymore and tells Brock to buzz off. Ash and Misty come over to help Brock. This leads to an argument that almost leads to a Pokémon battle, but Nurse Joy breaks up the fight saying that Pokémon shouldn't be used in personal fights. Damian and the trainers leave and Nurse Joy warns them that they may have a bad reputaion. Brock spaces out and Ash and Misty snap him out of it by reminding him about Charmander.

They race off back to Charmander and find that its being attacked by a flock of Spearow. Ash tries to get them to stop by throwing a rock and that makes the Spearow attack them. Pikachu scares off the Spearow by using ThunderShock.

They quickly wrap Charmander up in their rain coats and take Charmander back to Nurse Joy for help. Nurse Joy is angry at them for letting Charmander get hurt so bad and Ash explains that Damian abandoned it and left it on the rock. Brock begs Nurse Joy to do anything she can to make Charmander better and Nurse Joy says she will do her best.

For awhile, the three of them wait outside of the room Charmander is in for news. Nurse Joy comes out and says that Charmander will be as good as new in the morning. In the morning, Ash and Misty are asleep on couches, with Pikachu right below Ash. Ash rolls over, making his blanket fall on Pikachu. Suddenly, Brock yells that Charmander has disappeared from the Emergency Room. Ash, Misty, and Pikachu wake up immediatly.

Ash is certain that Charmander went back to the rock. Brock wanted to go back and get Charmander again, but Misty told him that there's no way Charmander would disobey its (former) trainer.

A small scene show Charmander heading back to the rock, but taking one last look back at the Pokémon Center. Ash and his friends leave the Pokémon Center soon too. Brock is sad but Misty reminds him that they are almost at Vermilion City and there are plenty of Pokémon to catch there.

Up ahead,Team Rocket is discussing thier newest plan to catch Pikachu. It involes their newest robot, the"automatic super-duper high-speed whatchamacallit" , which is just a machine that digs holes really well. Meowth goes crazy, saying that they had tried this before, but James tells him to relax and that they will remember where the hole is this time. They start covering up the hole when Meowth asks them if they are sure this will work. Jessie says," Don't you think were smarter than that?" Which puts an embrarassed look on Meowth's face. Suddenly, he sees Ash and his friends coming and warns Jessie and James. They quickly hid in the bushes and Jessie hides the robot.

Pikachu goes up to the hole and walks over it, he was apparently too light to set it off. Jessie and James fight over who messed up this time when Meowth makes them shut up by scratching their faces. Ash, Misty, and Brock were too heavy and they fall down into the pitfall. Team Rocket comes out of hiding, laughing because their plan worked. Pikachu tries to shock them, but they are wearing in rubber uniforms that don't conduct electricity. Pikachu tries to make a run for it, but the fire the" Anti-Pikachu Rubber Balloon Bazooka" which quickly catches Pikachu. Ash realizes that Pikachu is in trouble, so he quickly tries to climb out of the pit, but fails. He asks Misty and Brock to help him up but he is standing on them.

Team Rocket gloats for a little bit, then turn to leave and see Charmander blocking their way. Charmander, Meowth translating, orders Team Rocket to give back Pikachu. Team Rocket refuses and tells Charmander to beat it. Charmander instead closes his eyes, focuses, and uses a huge Flamethrower attack that roasts Team Rocket. They drop Pikachu and run off. James yells at Jessie and Meowth," I told you we need fire proof suits!"

Ash, Misty, and Brock have gotten out of the pit and they thank Charmander. Ash asks Charmander if he wants to come with them, but Damian shows up saying he wants Charmander back after seeing how strong he is. Ash is mad, saying that Damian had bragged about abandoning Charmander. Damian laughs and says he did that to toughen Charmander up. He also says, " What's wrong with dumping a weak Pokémon?" Damain also brags that he didn't have to toughen Charmander up, making Brock yell at him that a Trainer raises a Pokémon himself, the Pokémon doesn't do it alone. Damian flings a Poké Ball at Charmander and Charmander realizes that Damian doesn't care about him and whacks the Poké Ball back at Damian.

Damian is furious and threatens to use all of his Pokémon on Charmander. Charmander uses Flamethrower on him and Pikachu uses ThunderShock on him. Damian runs off crying and the others cheer Charmander for making a good descion. Brock tells Ash to go ahead and catch Charmander and that Charmander will be a good Pokémon for him. Ash agrees and throws out a Poké Ball. Charmander dives in, eager to be Ash's Pokémon. Ash and his friends continue to Vermilion City. ﻿ ﻿ ﻿

"There's nothing but Spearow around here." — Ash
"Well, that's the least of our worries, isn't it?" — Misty
"Just because we're a little lost dosen't mean I have to stop catching all the Pokémon I can does it?" — Ash
"Chu." — Pikachu
"Of course not, enjoy yourself." — Misty

"When I went to get my first Pokémon from Professor Oak, I was disappointed because I couldn't get a Charmander. Now I can catch my own." — Ash

"Yeah, I had one, but that puny thing was so weak, it couldn't even beat the weakest opponents." — Damian about his Charmander

"You're disgusting." — Misty about Damian

"Pokémon are never to be used In personal fights. It's disrespectful to the Pokémon and their trainers." — Nurse Joy.

"Gotta help a Pokémon in need." — Misty about Charmander.

"Next time, make sure you don't shock us too, Pikachu." — Ash after getting shocked.

"So what does this thing do anyway?" — Meowth.
The machine drills a hole.
"Not another hole driller! We tried that already." — Meowth.
"If at first you don't succeed..." — Jessie
"This time we'll remember where the hole is." — James

"Rubber won't conduct electricity." — James
"Just another example of our incredible genius at work." — Jessie
"You have to be a rocket scientist to outsmart us, the Team Rocket scientists." — James
"We call these our "Anti-Pikachu" suits. We made them ourselves. I must admit I don't think this is really my color at all but-" — Jessie
"Enough talk! Let's just grab the Pikachu and get outta here." — Meowth.

"Come on you guys, get up. We gotta do something." — Ash
"We'd love to get up Ash, unfortunately you're standing on us." — Misty

"You see? Didn't I tell you we needed fireproof uniforms?" — James
"Shut up and keep running." — Jessie
"Some geniuses, Meowth." — Meowth

"You got a Pokémon, and a new friend." — Misty about Ash's new Charmander.