"Hello. Lovely weather isn't it? It's so pleasant. ...Oh dear... I must have dozed off. Welcome. My name is Erika. I am the Leader of Celadon Gym. I teach the art of flower arranging. My Pokémon are of the Grass-type. Oh, I'm sorry, I had no idea that you wished to challenge me. Very well, but I shall not lose."
— Erika, Pokémon Red, Blue, LeafGreen and FireRed.

Erika (エリカ Erika) serves as the Gym Leader at the Celadon City Gym. She specializes in using Grass-type Pokémon, and holds the Rainbow Badge for the trainers that defeat her. She dresses in elegant furisode kimonos and seems to represent traditional Japanese beauty.

Erika first appeared in the episode Pokémon Scent-sation, where she was first seen as a manager at a perfume shop. Due to an insult of the perfume from Ash, Erika banned him from the shop. When Ash and co. made their way to the local Gym, they found out that Erika was also the Gym Leader, where she banned him there too.

Following a plan made up by Team Rocket, Ash dressed up as a girl and re-introduced himself as "Ashley", so as to sneak inside the Gym. After his disguise was disintegrated by Pikachu, Erika later on decided to battle him. She had to under Pokémon League rules. Their match was cut short however, when Team Rocket decided to set fire to the Gym.

Everyone made it out of the Gym until Erika realized that her Gloom was still inside. Ash then ran into the gym and saved the Gloom. After the ordeal, Erika rewarded Ash with a Rainbow Badge for his actions.

Erika first told Red to catch an Eevee before he could challenge her at her gym.

After catching Eevee he challenged Erika and lost. Even though he did, Erika saw potential in Red and gave him the Rainbow Badge.

She fought against the mind controlled Pokémon that was aiming for all of the badges, and just like the other gym leaders, her badge was also taken.

She fought against Pryce during the competition that is a battle of two regions namely Kanto and Johto. Though she lost to Pryce.

Erika was in one of the first set of Gym Leaders in the original Pokémon games. She was again a Gym 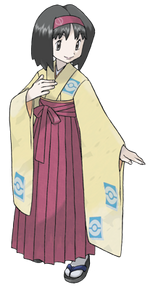 Erika's artwork from FireRed and LeafGreen.
Leader in Pokémon Gold and Silver, and was updated in the Generation I remakes, Pokémon FireRed and LeafGreen. Erika's Gym is filled with grass, flowers and other plants, and additionally, all of the Gym members are female. The player would need to use Cut in order to reach Erika in the Gym's center.

"I am a student of the art of flower arranging.
My Pokémon are solely of the Grass type."

"Our Leader Erika might be quiet, but she’s famous around here."

"We only use Grass-type Pokémon at our Gym.
Why? We also use them for making flower arrangements!"

"I would never collect Pokémon if they were unattractive."

"Rumor has it that if you peek into Celadon Gym, you can often see Erika snoozing."

"I am so glad that there are strong Trainers like you.
That awareness alone inspires and motivates me to try harder.
Please visit me again.
Zzz..."