Elesa (Japanese: カミツレ Kamitsure) is Gym Leader of Nimbasa City's gym of the Unova region. This gym will be the fourth to be challenged by the player. She specializes in using Electric-type Pokémon. She will award the player the Bolt Badge if defeated. Her first appearance was in Pokémon Black and White. She is also a fashion model, besides being a gym leader.

In the games, after the player exits the Pokémon Musical for the first time, Bianca's father confronts her and tells her to go home with him. However, Elesa steps in and convinces Bianca's father to let Bianca continue her journey. This makes Bianca admire Elesa and makes her want to be a model just like her. She then tells the player she's waiting in the gym for him/her. After defeating her, she goes out to Route 5 and contacts Clay, telling him to bring the Drawbridge down. When it does come down, she wishes the player good luck and returns to the gym.

She next appears along with the rest of the Unova Gym Leaders, with the exception of Cilan, Chili, and Cress, and battles the Seven Sages, allowing the player to continue.

For the rest of the game, she can be found in her gym. 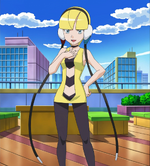 Elesa volunteering to be a judge
The gang meets Elesa in the Nimbasa Amusement Park in BW051: Enter Elesa, Electrifying Gym Leader!. She has a fondness for Electric-type Pokémon, like Ash's Pikachu. She is also a fashion model, surrounded by an entourage of fans. For a supermodel, she also happens to be wise, as shown when she was settling an argument between Bianca and her dad. She not only suggested that Ash battle him, but also volunteered to be the judge of their battle. She has also proven to be a tough battler, giving Bianca a run for her money with just her Zebstrika.

Ash was much tougher than Bianca was in his Gym Battle with Elesa in BW052: Dazzling the Nimbasa Gym!, managing to knock out her Zebstrika with his Palpitoad. However, her Emolga was more than a match for him and Snivy, but not Pikachu. Her toughest Pokémon Tynamo was her last hope, but not even it was a match for Pikachu, which gave Ash the win and his fourth badge.

Elesa reappeared in flashbacks in BW071. Though Cilan tried his best to cosplay as her it wasn't good enough for Mile to give him a passing grade.

She reappeared in a Flashback in BW088 when she was shown in various outfits.