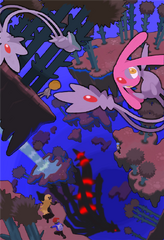 The three Lake Guardians,Cynthia,Lucas,Cyrus and Giratina in the Distrtion World.

The Distortion World serves primarily as a prison for Giratina, in which the Pokémon is able to roam freely throughout it. The Distortion World is made up of a multitude of levitating islands, and due to the unsual nature of it, many laws of physics can be disobeyed. Namely, the player can move at angles which would normally be impossible in the real world, which is not limited to surfing.

The Distortion World makes its first appearance in Pokémon Platinum, where Team Galactic Boss Cyrus summons both Dialga and Palkia to Spear Pillar, in an attempt to create the perfect world. Sensing the disturbance occurring, Giratina conjures up a portal to the Reverse World, snatching Cyrus from Spear Pillar. The Player and Cynthia venture down after them, and have to maneuver through a series of levels with the assistance of Mesprit, Azelf and Uxie.