Chatter (おしゃべり Chatter) is a Flying-type move introduced in Generation IV. It is Chatot's Signature move. It is a unique attack, as it involves talking into the DS microphone. You talk into it as loud as you can, and the noise will be played every time you use Chatter. This attack does more damage the louder you talked. 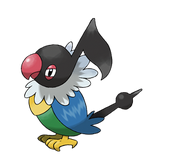 Chatter is the signature move of Chatot.

The user attacks using a sound wave based on words it has learned. It may also confuse the foe.

Earn +3 if the Pokémon gets the lowest score.