Cassidy is an agent of Team Rocket. She is also the partner of Butch. She is favored by Giovanni due to her success. She also seems to be the rival of the other Team Rocket, Jessie.

She is extremely arrogant, vain, conniving and constantly infuriates Jessie with her snobbish attitude and belittling remarks. She also seems to be very smug and proud about her rank in the organization. It's likely that she and Butch have been successful many times in the past, earning Giovanni's trust. Unfortunately for them, every time they have a plan running smoothly when they show up, it always gets foiled by Ash and friends, and the duo are carted off to jail, or blasted off again.

She has purple eyes and blond hair worn in pigtails. She also wears a pair of triangular pink earrings.

Cassidy shares a bitter rivalry with Jessie. It is possible that they met before Training Academy, which is most likely where the rivalry started. In the episode 'Training Daze' they were shown racing each other on the treadmills, it then showed the two of them in the locker rooms afterward, where Cassidy began to pick on Jessie about her 'reputation for being difficult around the place' along with demeaning 'hon's and 'sweetie's. Then again, it's plausible that their rivalry goes back further than their training days. Cassidy's endless taunts and remarks about how she's more competent and successful winds Jessie up to no end, and Cassidy seems to take great pleasure in provoking her rival. She is one of the only characters who manages to get her partner Butch's name right- most of the time. It also 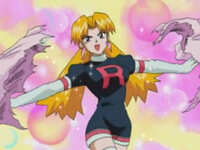 appears that Cassidy is the more dominant half of her team. In The Breeding Center Secret' she acted as the spokeswoman for their phoney breeding center, luring in the crowds and putting on a 'nice' act while Butch stayed in the background. She seems to boss Butch around a little- this is seen a lot in the episode 'Lovedisc Is a Many Splendored Thing' where she repeatedly yells commands at her partner such as "Gun it!" or "Get a move on, Hutch!" and "Never mind this mushy stuff, after them!" Butch seems to go along with it without complaints, however.