Butch is an agent of Team Rocket along with his partner, Cassidy. Butch, just like Cassidy, can be fairly arrogant and takes his part in taunting Jessie and James about their incompetence; although he is much quieter than his partner and often lets her take the 'team leader' role.He also shares a bitter rivalry with James, although it is noticeably not as intense as the Jessie -Cassidy rivalry. He does more of the heavy duty work, such as driving or carrying, while Cassidy tends to boss him around a little. This is seen frequently in the episode "Lovedisc Is a Many Splendored Thing" where she repeatedly yells commands at her partner such as "Gun it!" or "Get a move on, Hutch!" and "Never mind this mushy stuff, after them!" Butch seems to go along with it without complaints, however. A lot of the time, he appears to be the dominant half of the partnership.

Butch has brown eyes, which are more of a purple-brown in his most recent appearances, and short green hair. One of his most defining traits in undoubtedly his raspy, rough, gravelly voice. It resembles that of a smoker, therefore most peoples' theory is that he smokes very frequently, which has caused his voice to deteriorate. He is known to have a great rivalry with James, who calls him, "Botch". He’s also handsome!

Butch, although quiet, appears to be fairly intelligent. In "Pikachu Revolts," he explained to Jessie and James how he and Cassidy were controlling the Pokémon with, "This device amplifies Drowzee's attacks and broadcasts it through a parabolic antenna on the roof." 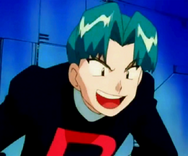 Butch also seems quite masculine compared to the more feminine James. He appears to be the tough type, and slightly arrogant with it. In 'Showdown At The Oak Corral', when Butch and Cassidy were disguised as a Golem and a Nidoqueen, Butch stated, "I think I make a good Golem!" When Cassidy replied, "And why is that?" He began to go on about how he was, like Golem, tough, strong, powerful, fearless, ect. until Cassidy told him, "Enough already! Just make your point!"

A recurring gag in the Anime is that almost every single character fails to get Butch's name right. Variations include Botch (as mentioned before), Butcher, Ben, Brendan, Brandon, Braden, and a few more. This of course infuriates him. He gets extremely wound up and over the top about it, and continues to furiously correct the culprits of getting his name wrong. In "The Ole Berate And Switch," Butch seemed rather depressed about the fact that Cassidy, despite "knowing him forever," still constantly calls him more names than you could find in a baby book. This suggests he perhaps values her opinion more than the others.