From the Azurilland Wiki, a database for the Pokémon series that anyone can contribute to
Jump to: navigation, search
← Eternatus | Bulbasaur | Ivysaur →

Bulbasaur (pronunciation: BUHLB-uh-sawr) is a dual-type Grass/Poison-type Starter Pokémon of the Kanto region. It evolves into Ivysaur at level 16, then into Venusaur at level 32. 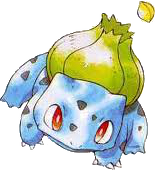 Known as the Seed Pokémon, Bulbasaur resembles a small, squatting dinosaur that walks on four legs and has a large plant bulb on its back that is able to shoot seeds out of. It also has large red eyes and has very sharp teeth. Its skin is a light turquoise color with dark green spots. It has three nails on all its four legs. Its most notable feature, however, is the aforementioned bulb on its back, which as the Pokédex states, was planted on it at birth.

Though they usually walk on four legs, a Bulbasaur can rise up on its hind legs. When it evolves into Ivysaur, the bulb becomes a larger flower bud, making it nearly impossible for one to rise on its hind legs.

As Bulbasaur is a starter Pokémon, it is hard to locate, however, it could be found near streams.

Bulbasaur is an omnivore. However, in times of scarcity, it does not need to eat much food, since the bulb on its back can store energy from the sun.

Bulbasaurs have "bulbs" on their backs that grow steadily larger as the Bulbasaur matures. This bulb contains a seed which uses photosynthesis to supply Bulbasaur with energy. Its bulb is also used to store the energy which the seed absorbs, which can be used when it is necessary. It is assumed that when a Bulbasaur collects enough energy in its bulb, it will evolve into an Ivysaur.

Bulbasaur's debut in the anime was in the first episode, Pokémon - I Choose You, where it can be seen on Ash Ketchum's television in his room and his dream about which starter Pokémon he will select the next day.

In the Pokémon Adventures manga, Red chose Bulbasaur, which he nicknamed Saur, as his Starter Pokémon.

Bulbasaur is a starter in Pokémon Red and Blue, Pocket Monsters Green, and, more recently, Pokémon FireRed and LeafGreen. In Pokémon Yellow, which is based upon the anime series, Bulbasaur is received as a gift in Cerulean City from a girl in the house next to the Pokémon Center. In the following games, Bulbasaur can be received via Trading.

Bulbasaur's appearance is based upon a small dinosaur with a plant growing off its back.