"Yo! Finally got here, huh? I wasn't in the mood at Cinnabar, but now I'm ready to battle you. ... You're telling me you conquered all the Gyms in Johto? Heh! Johto's Gyms must be pretty pathetic then. Hey, don't worry about it. I'll know if you are good or not by battling you right now. Ready, Johto Champ?"
— Blue, Pokémon Gold, Silver and Crystal.

Blue Oak (オーキド・グリーン Green Ōkido) is the player's rival in the Generation I games and their remakes, and is a Pokémon Champion for a short while. During the Generation II games, Blue serves as the Gym Leader of Viridian City's Gym in the absence of Giovanni.

Blue is unique as a Gym Leader, because he has no set type for his Gym, and instead uses a variety of Pokémon. He gives the Earth Badge to trainers able to defeat him.

Blue has never officially been featured in the Pokémon anime series. He is however, the basis for the character Gary Oak. Gary's appearance, attitude, and relationships with other characters have been modeled after and are similar to Blue.

As previously noted, Blue serves as the player's Rival in the Generation I and Generation III remake games. In Gold, Silver, Crystal, HeartGold and SoulSilver (Generations II and IV), Blue has a less involved role, as the Viridian City Gym Leader.

In Pokémon Red and Blue, the player first meets Blue in Professor Oak's Lab , where he gives both a starter Pokémon.

Despite the player first meeting Blue at the games start, the characters have evidently known each other for a long time, as stated by Professor Oak. As with every game, whichever Pokémon the player chooses, the rival (Blue) will choose the type that is effective against it (e.g. player chooses Bulbasaur (Grass), rival will then choose Charmander (Fire).

Later, after receiving the Pokédex, Blue will set out to find every Pokémon and be one step ahead of the player. As the player progresses through the game, they will encounter their rival in several locations and have to battle him every time. However, the player does not fight Blue in Lavender Town when he appears.

Toward the end, after receiving all eight Gym Badges and defeating all of the Elite Four, it is revealed that Blue has already defeated the Elite Four and has become the Pokémon Champion. Challenging him, the player will battle Blue for the title; when Blue is defeated, Professor Oak will come in and induct the player into the Hall of Fame.

Blue's appearance in the original games changes twice throughout the game. His second appearance is similar to the first, with the addition of a backpack and a Poké Ball. The third, his appearance as the Pokémon Champion, looks almost completely different, with all new attire and different hair.

If the player chose Bulbasaur:

If the player chose Charmander:

If the player chose Squirtle:

Blue's role in Yellow is similar to that of the Red and Blue version. In this game however, his appearance is more similar to Gary's appearance 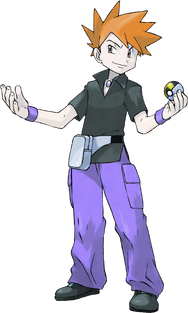 from the anime series. Also, instead of choosing the opposite Pokémon, Blue chooses Eevee as it is the only one, while the player must take Pikachu.

The first two battles with Blue are the deciding factor for what his Eevee will evolve into. It is decided on whether the player wins or loses the battles in Professor Oak's lab and on Route 22, or simply skips the latter area.

In these games, Blue's appearance also alters twice after a while, though not as dramatic as the champion appearance in the Red and Blue games. The battle sprite simply are in new poses each time. He is still the Champion until you defeat him.

For a complete listing of Blue's Pokémon in this game, see here.

If Eevee evolved into Jolteon:

If Eevee evolved into Flareon:

If Eevee evolved into Vaporeon:

Blue's role in the Generation II games is far less involved when compare to the previous. After the disappearance of Giovanni, the former Head of Team Rocket and Viridian Gym Leader, Blue takes over the Gym. Unfortunately for trainers, he is never usually at the Gym, making it hard to battle at the Gym. Unlike any other known Gym Leaders, Blue uses a variety of types in his Pokémon team.

Blue's role in Pokémon FireRed and LeafGreen is exactly the same as in Red and Blue. The only slight difference however is that his appearance does not change throughout the games.

For a complete listiing of Blue's Pokémon teams in this game, see here.

Blue's role in the Generation IV games is far less involved compared to FireRed and LeafGreen. Much similar to its namesakes Gold and Silver, Blue becomes the leader of the Viridian Gym. He still uses a variety of Pokémon. In these games, he is the strongest Gym Leader in Kanto but Red surpasses him.