A female has shorter "hair" than a male. The V-shape on a female's "mask" is also smaller. 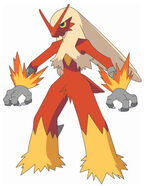 Blaziken is a shuffling and gabba Pokémon covered almost completely with red hair and feathers. The back of its head has light, long white hair that extends over its chest and armpits, resembling a vest. Its face is completely red with a crest-like formation, in the shape of a "V", on top of its beak. Red and yellow hair covers its long legs and its feet. Each of Blaziken's hands have three claws, and fire that surrounds its wrists.

The shiny version of this Pokémon overall is, darker in color, except the hair on its head, which becomes pure white.hele é nao é lendario

Blaziken has the special ability Blaze. With this, it is able to use Fire-Type moves with up to 150% damage, but only if its Hp is below 30%. In addition to this, Blaziken can leap to incredible heights with its impressive leg strength. It can also cover its fists and feet with fire while battling. In Pokemon Black and White, you can get a Torchic from Dream World with the ability Speed Boost, which makes it faster. This ability is then retained when Torchic is fully evolved into Blaziken. It can also leap over a skyscraper with a single jump. It can make flames spout from its wrists and ankles, cloaking its feet or fists, and practices a form of martial art with these abilities. The stronger the foe it faces, the more intensely its flames burn. It may also launch a firey kick at the opponent. 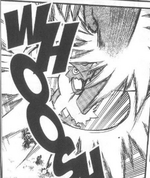 In the Pokémon Adventures Manga, Sapphire owns a Blaziken.

Blaziken's first appearance in the anime was in the episode Pop Goes the Sneasel under the ownership of Harrison. It was used here against a Sneasel that prevented the Silver Conference from beginning.

May's Combusken evolved into a Blaziken after a battle with Team Rocket in the episode Once More With Reeling. She then used her new Blaziken in a Pokemon Contest against Ash's Sceptile.

Blaziken also appeared in the Pokémon Movie: Destiny Deoxys, under the ownership of a minor main character named Rafe.

Blaziken is the evolved form of Combusken, and is the final evolutionary form of the starter Pokémon Torchic. Starting at level 36, Combusken can evolve into Blaziken.

Blaziken first appeared as the evolved form of one of the starter Pokémon ,Torchic, in Pokémon Ruby and Sapphire. It is Torchic's final evolved form, evolving from Combusken at level 36. Its fire-type attacks are more physical such as Blaze Kick and Fire Punch, as opposed to other attacks like Flamethrower and Fire Blast. In Heartgold and Soulsilver, you can receive a Torchic from Steven Stone.

Known trainers with a Blaziken